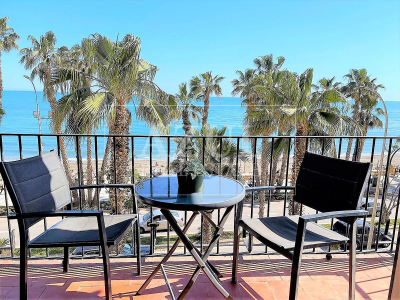 LUXURY AND DESIGN IN FRONT OF THE SEA.

The property is strategically located on the beachfront in the stately area of ​​La Malagueta, next to several landmarks in the city such as the Gran Hotel Miramar, the Plaza de Toros, Muelle Uno, the Alcazaba and the beautiful courtyards of the Gibralfaro Castle, among others...

Due to its location, it has a wide range of restaurants, culture and leisure, in addition to being a simple walk from the Historic Center. It should be noted how excellently it is connected by public transport with the rest of the city.

As for the benefits of the property, in addition to its location, it should be noted that it has wonderful panoramic views of the sea, from all the rooms of the house, especially from the living room that has 3 large windows.

It consists of approximately 170 m2 and is distributed in a large living room with sea views, a fully furnished and equipped kitchen, a large separate laundry area, 3 large bedrooms with large fitted wardrobes (the main one with an en-suite bathroom and a dressing room) and a two bathrooms . complete to serve the rest of the house.

Originally the house had 4 large bedrooms, although it is currently divided into three, a large living room and a separate sitting room, with the possibility, with hardly any changes, of having four bedrooms again.

It has a parking space and storage room.